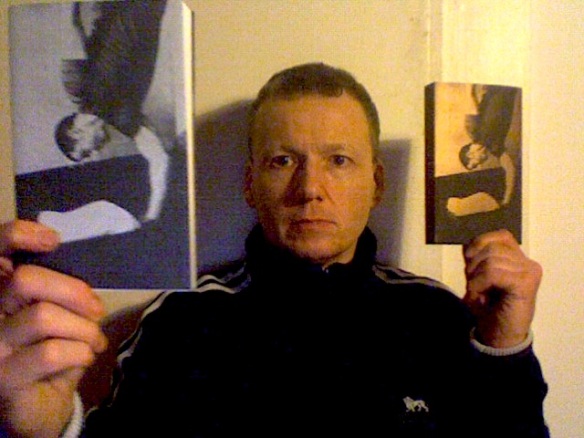 “WHO KNOWS the truth about Ray “The Cat” Jones: the world’s most notorious burglar or a small-time jailbird loved by journalists grateful for his exciting yarns about robbing the fabulously rich?

So writer Stewart Home has chosen to tell the master thief’s story as a novel rather than a documentary book.

The 9 Lives of Ray The Cat Jones tells of a Ray Jones, who nearly became world middleweight boxing champion but instead turned into the greatest-ever cat burglar, stealing jewellery from megastars Elizabeth Taylor and Sophia Loren, the private papers of the Duke of Windsor, paintings by Rembrandt and the furs of the London upper-class women, often approached via the rooftops of the Mayfair district.

Ray’s carefully targeted burglaries are perfectly planned and thrillingly executed, as is his jail breakout, one of the most stunning in recent English penal history.

Above Stewart Home holds up the special edition (sold out) and ordinary edition of his novel The 9 Lives of Ray The Cat Jones. You can order it online from the publisher Test Centre.