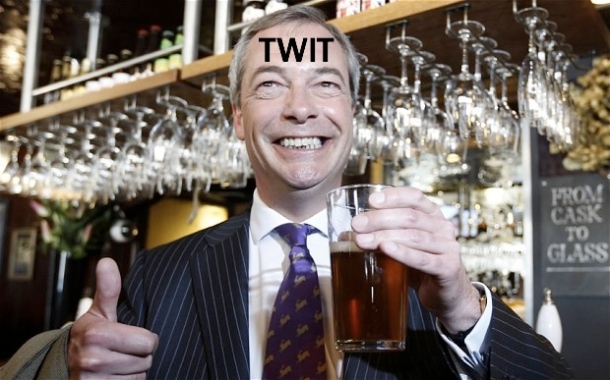 The ‘expert’ bullshitting team at UKIP have just unveiled their latest creation – non-alcoholic whinges and wines. The Patriot’s White and Bombasting Against The Reds are premium blends of carefully selected sour grapes from a collection of grumpy old men who are so senile they might as well be dead. Experience the dead hand of tradition weighing like a nightmare on the minds for the living – all courtesy of the people who are putting the poop back into party politics (UKIP).

The Patriot’s White and Bombasting Against The Reds are available at a street corner near you (as long as you live in a UKIP selected backwater in middle England).

The Patriot’s White: A refreshing blend of sour grapes with zesty grapefruit, gooseberry and fig flavours, and a long rant to finish.

Bombasting Against The Reds: An intense range of sour grape flavours with black cherry, blackcurrant, chocolate and cedar notes. Round and soft with great acidity and the usual bum note to finish!

Please bullshit responsibly. The law does not permit persons under the age of 18 to indulge in party political bullshit. UKIP discourages you from indulging in Euro vices such as drinking wine – a beverage produced in many European countries but not by tradition in the British Isles. UKIP believes true patriots drink beer and that Britain can proudly claim its place as the most obese country in Europe thanks to its consumption of pints!

Vote Now! Don’t Wait Until Election Day When It Might Be Too Late!